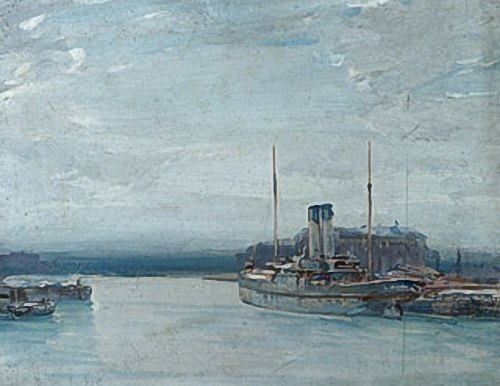 Throughout his life Rollinson, who lived in Cottingham, East Yorkshire, painted the Humber estuary. Here a steamer is shown in a creek or at the mouth of a river, suggesting a tidal harbour such as Grimsby or Hull. The buildings behind the ship appear to be warehouses or a customs house. There is a barge in the picture suggesting that goods were taken to this place for transhipment downriver.

The ship, pre-World War I in construction, appears to be a short passage cargo steamer, possibly with room for a few passengers, typically used for crossing the North Sea and Channel. The black tops of (yellow?) funnels (hard to judge in the twilight) suggest ownership by a railway company, probably the Great Central, who poured a lot of money into its shipping line and built its own docks at Immingham (near Grimsby). From here they traded across the North Sea to the Baltic, Germany, Holland and Belgium: coal out and pit-props back was one of their mainstays.

The ship in the Sunderland Rollinson painting might be the Marylebone or the Immingham, both built for the Great Central Railway’s Grimsby-Rotterdam service in 1906. They were built originally as twin-funnelled turbine steamers, but re-engined a few years later with one funnel.  Rollinson moved to Cottingham in 1910, so this picture is likely to have been painted soon after – certainly before WW1.

We are grateful to Ian Jack for his assistance.