Sunderland Rollinson was born in Knaresborough in 1872, although his family moved to Scarborough shortly afterwards. He studied at Scarborough School of Art and at the Royal College of Art in London. He lived and taught in Edinburgh from 1904 to 1908, and in 1910 moved to Cottingham, East Yorkshire, where he took a teaching job at Hull College of Art. He taught at Hull for 28 years until his retirement in 1937. He lived for many years at 3 Market Green, Cottingham, which provided the scene for a number of his paintings. He also had a studio at 12 Princess Street, Scarborough.

In 1922 he married one of his students, Eleanor Malam, an accomplished artist and miniaturist in her own right.

Throughout his life he continued to paint the Humber estuary, the Yorkshire Wolds, Teesdale and Midlothian. His lavish plein-air technique owed much to the continental nineteenth-century tradition, which remained a staple part of reactionary painting in Britain in the first half of the twentieth century. He was also a skilled print-maker. He exhibited at the RA, the Paris Salon, the RSA and RBA. A retrospective exhibition of his work was held in the Borlase Gallery, Blewbury, in 1976. He was awarded the National Medal for Success in Art by the Science and Art Department in 1896 and 1897. 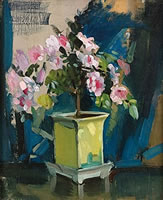 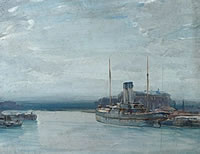