Self-taught aviation and motor racing artist and etcher born in London. Nockolds was attracted to motor sport on his first visit to Brooklands in 1924. He contributed to Motor Sport, Autocar and Motor, and excelled in capturing the atmosphere and technical aspects of motor racing. He applied the same skill to aviation art - his authoritative picture of the Battle of Britain, commissioned for Royal Air Force Fighter Command, is a tour de force. During World War II Nockolds served in the Air Force, developed a revolutionary camouflage for the Mosquitoes and was an Official War Artist. Immediately after the war he produced a remarkable series of near-abstract paintings for Armstrong Siddeley celebrating the effects of the new generation of jet engines. He was a chairman of the Guild of Aviation Artists, 1975, and of The Brooklands Society, 1976. Nockolds oeuvre was diverse; he produced excellent drypoints, published by Autocar; a series of abstracts of science and technology for Mullard; sporting prints for Frost & Reed; and commissioned portraits of gun dogs. He showed at RA, RP, Guildhall Art Gallery and elsewhere, and there was a memorial exhibition at Qantas Gallery In 1980. He lived near Farnham, Surrey. 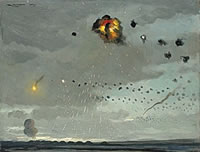