Painter, born in Tettenhall, near Wolverhampton, he attended Bilston School of Art and the RCA, London from where he graduated in 1911. Cooper specialised in portraits, figure subjects and landscapes, exhibiting at the Manchester City Art Gallery, Walker Art Gallery, Liverpool, RA, Chenil Galleries, GI, RBA, RSA the Paris Salon and elsewhere. He served in the Artists' Rifles, 1914-18 during which time the sight in one eye was impaired by chlorine gas. In 1940 he painted a portrait of George VI and his portrait of Winston Churchill, painted in 1943, was widely reproduced. Copper was elected ARBA 1921 and a full member two years later. His work is in the GAC and the NPG. While still a student, Cooper entered a competition for which John Singer Sargent was one of the judges. Impressed by the young Cooper’s work, Sargent invited Cooper to work with him at his studio in Tite Street, Chelsea which had belonged to James McNeill Whistler. Cooper was to spend about a year with Sargent assisting the Master with backgrounds and details for his paintings. At the end of World War I Cooper was appointed as Official War Artist to the R.A.F. He became an expert in the art and technique of large scale aerial camouflage, sketching and painting landscapes from a variety of aircraft. Some of his related work is in London's Imperial War Museum. 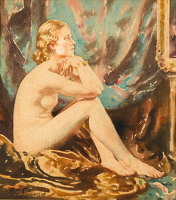