Jean Berne-Bellecour was an official French War Artist attached to the French War Office and he continued the traditional reputation of the Berne-Bellecour family.  For just as the war of 1870 was recorded by his father, the 1914-18 conflict was recorded by his son, Jean.  He not only studied at the Beaux-Arts, and with his father, but was also a favourite pupil of the famous 19th Century French military painter, Edouard Detaille, who firmly believed in him as a future great military painter.

As soon as hostilities broke out, Berne-Bellecour was among the first to rally to the Front as a combatant and took part in the Battle of the Marne.  Here, in spite of fine personal heroism, he was able to sketch several scenes in connection with that great historical event, which was met with immediate and enthusiastic success in military circles.  His superior officers applied to the War Office for permission for him to be allowed to visit the entire line of French trenches, where he was given leave to roam at ease over the battlefield, sketching here and there at will, and often running great risks.  Berne-Bellecour's "Souvenirs du Front" met with such success in Great Britain, that he was invited to visit the British Front and produce a similar document depicting the life of the British soldier under fire.  He was afforded every facility to see the Tommies at their work, and all latitude and freedom were given him along the line.  These works were reproduced in "Dans les Lignes Anglaises" - a collection of studies from the British Front - part of a second volume of sketches that he made from the beginning of the war, with this particular painting amongst them.  His sketches are a remarkable series of life-like evocations of the daily routine of warfare.

Admirers of the work of this very fine French artist will remark that his method is that of an artist equally gifted as a portrait and as a landscape painter.  Berne-Bellecour’s dual gift has served him well, for an intimate connection exists between the terrible and sombre background of the military scenes depicted and their human significance.

There are three forms of the military artist’s expression.  One consists in the mere rapid sketches taken in the midst of action, sometimes even under the most terrible conditions.  Another method is that of the complete war picture - usually some war episode which the artists evolves graphically from his own notes and interprets later in his own studio.  But the third method - the one adopted by Berne-Bellecour - is that of the more finished sketch produced almost in the heat of action upon the battlefield.  At times, the artist has begged some soldier engaged in his perilous work to sit for him for a few moments while he notes some characteristic detail.  Thus, we feel as we look upon his drawings, the vivid truth and intense reality of the scene his pencil depicts.  His sketches are a remarkable series of lifelike  evocations of the daily routine of warfare that bring home to us the heroism of our defenders in the field.  Their realism teaches us a magnificent lesson.

Berne-Bellecour  was always impressed with the extreme smartness and the imperturbable coolness of the British officer under all conditions (see Painting No. 1).  The tall young officer, hands thrust into his pockets, a pipe in his mouth is bending his head down to watch one of his own men fill his own pipe with tobacco.  Berne-Bellecour was heard to remark “ These English officers in every circumstance of their existence look as if they had just come out of their bathroom.”  Another detail which impressed the French artist - though it is almost impossible to convey it by means of his art - is the silence of the British soldier who is able to perform his military duties in perfect silence, without discussion or even appreciation of any kind.  He does not question the whys and wherefores of the great, incomprehensible, absurd and supreme mystery.  He is quietly determined and obeys his superiors without comment.  And this, in the opinion of Berne-Bellecour, is the characteristic trait of the British soldier which entirely distinguishes him from his French comrade.

Acknowledgement to Claire Pratz, author of “France Within.”
Berne-Bellacour served at the Battle of the Marne, during which he made some drawings.These were so well received that he was appointed Peintre du Ministère de la Guerre et du Musée de l’Armée, and he continued to sketch French and English troops in this capacity. 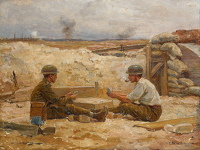