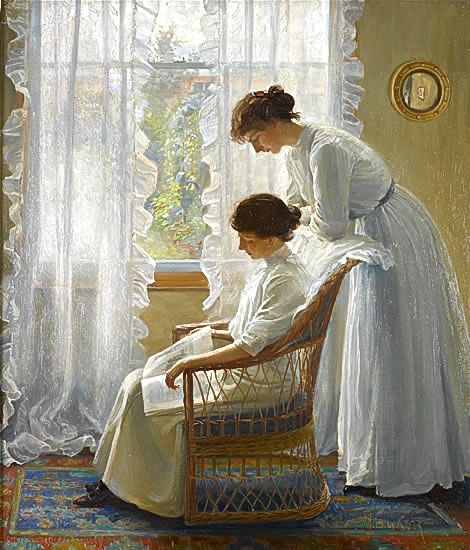 The present picture is one of Gash’s first major works painted at his home at 145 Stamford Road, Kettering. It was probably completed in c. 1912 soon after moving there the year before. The sitters are Gash’s young wife and her sister.
Gash was clearly aware of the success of the composition himself, executing another version of the work in watercolour (cat. 16) and painting a variation of the same subject A piece of Music, in which the composition is reversed, the standing figure shown holding a violin looking over the shoulder of the seated figure who holds a piece of music. The painting proved one of the most widely admired works in the exhibition at the Castle Museum in Nottingham in 1913: ‘the beauty of it lies in the simplicity of the subject. The easy graceful pose of the figure and … the toning of the white dresses with the light streaming through the curtained window.’ The Nottingham Daily Express, 10th May, 1913 Cat. 14 Kenneth McConkey has kindly pointed out that this composition is very reminiscent of Clausen's The Window, 1912 (South African National Gallery, Capetown) - even down to the Orpen-esque convex mirror.