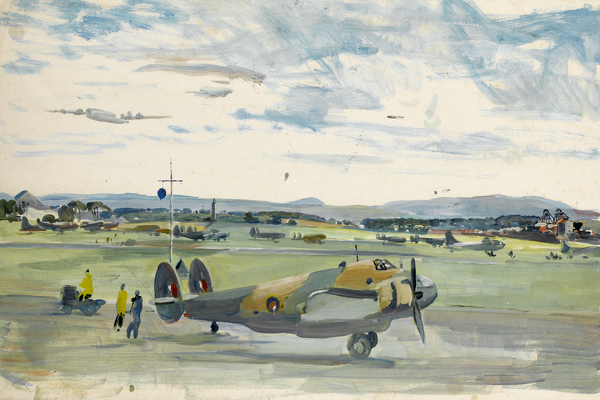 This painting by Cundall has a number of curious characteristics: the aircraft appears to combine the features of a Lockheed Hudson and a Lockheed Ventura (both of which were used by Coastal Command), whilst omitting the glazed dorsal gun-turrets characteristic of both. The nose looks like that of a Bristol Beaufighter, while other aspects resemble the more obscure Reid and Sigrist Snargasher. Though Cundall sometime approximated features, a natural consequence of sketching rapidly on the spot, he was usually an accurate observer of aircraft and demonstrated considerable knowledge of them. The bright yellow clothing of the ground staff appears to be yellow oil-skins: high-visibility clothing was not introduced until the 1970s. On the basis of the landscape in the background, with a coal-tip pyramid and coal-pit machinery visible, the setting appears to be the North of England.