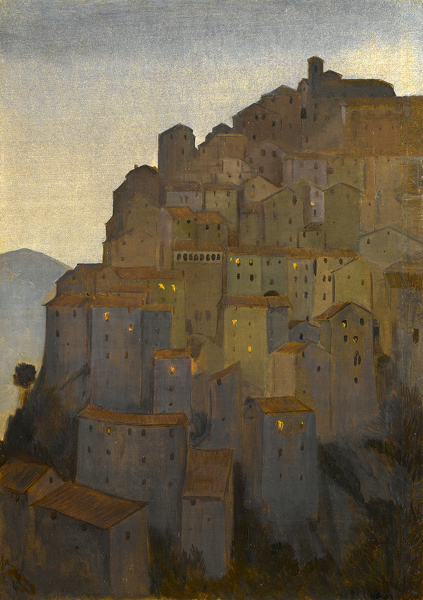 Anticoli Corrado, a small village south of Rome, was famed for the beauty of its inhabitants and had, since the nineteenth century, been popular with Italian painters. Following in the footsteps of Colin Gill the first Rome Scholar, Winifred Knights and Job Nixon spent the Summer months of their scholarship in Anticoli. Knights refers to Cundall in a letter written from the village, dated 28th May 1921: 'Job's friend (Cundall, 14c Whitehead's Grove, Chelsea) is arriving here in the middle of June. Job says he would bring out my dresses. . .' 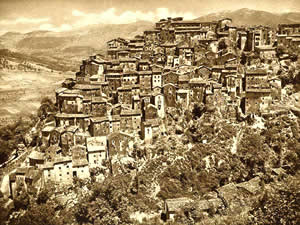 Knights' first impression of Anticoli conjures up a similar image to Cundall's painting: 'Anticoli is a glorious place and a little terrifying, so wild and rugged with huge volcanic mountains all round. I have never imagined a more beautiful place. It hardly seems real. We saw Anticoli just springing up out of the precipice like a bundle of toadstools, all grey houses with green moss covered roofs' (letter to her mother, XIII, Jan 22 1921).

Cundall's remarkable dusk-time view is painted from the area below the village where artists rented their studios - Knights described her studio as 'a joint affair, Nixon, Cundall's (a college man), Miss Southby's and mine is overhung in one place by a gigantic rock which hangs by a hair.' The house of Rosa Ceccarelli, where Knights lodged, with its distinctive loggia, is clearly visible in the centre of the composition.

We are grateful to Alistair Hicks for his assistance.