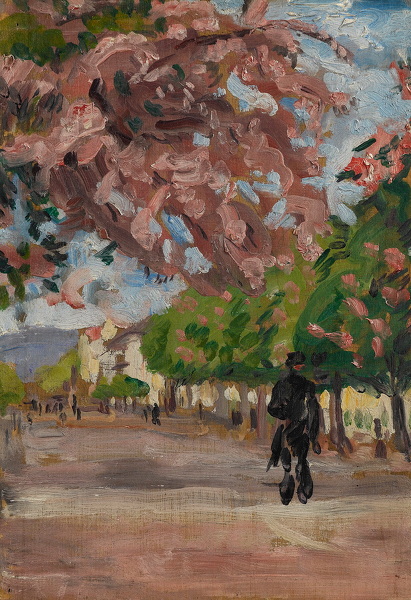 It’s commonly believed that Paul Gauguin worked in isolation in Tahiti, living in self-imposed exile from France and far from the reach of the European avant-garde. But from 1897 to 1898 Gauguin was joined in Tahiti at Papete by a British painter, Arthur Haythorne Studd (1863 – 1919). It was Studd’s wish, as he declared in a letter to his friend James McNeil Whistler (dated 22 June, 1897), to establish a ‘Studio of the South Seas’

Arthur Studd studied art at the Slade School under Legros in 1888-89 and in Paris at the Academie Julian.  He quickly immersed himself in an artistic circle which included, Degas, Puvis de Chavannes,Charles Conder and James McNeill Whistler.   He also met and befriended Gauguin in Le Pouldou, Brittany in 1890.  From 1894 to 1895 Studd worked with Whistler in London where they were neighbours in Cheyne Walk, Chelsea.

A man of independent means and a collector Studd bequeathed three major works by Whistler to the National Gallery, London (now in the Tate Collection): Symphony in White, No. 2: The Little White Girl; The Fire Wheel; and Nocturne: Blue and Silver – Cremorne Lights).

He excelled in  producing small wooden panels painted en plein air, much inspired by the Post Impressionists.   Panels by Studd of a similar size are in the collection of Tate Britain.