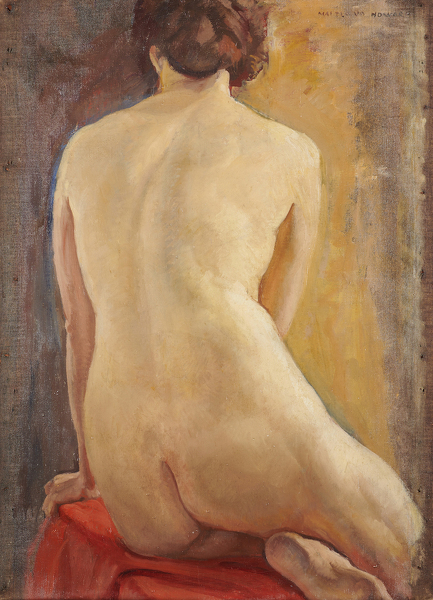 Hover over the painting to magnify (there may be an initial delay while the magnified image is loaded)
£6,800
Free shipping
Enquire
Add to cart

Margaret Maitland Howard was a painter and draughtsman, born in London. She studied at the Byam Shaw and Vicat Cole School of Art and Royal Academy Schools, where she was a multiple silver medal-winner plus other awards. She exhibited RA, NEAC, SWA, RP and ROI. Just after World War II she was appointed draughtsman to the Institute of Archaeology at London University. She was Ridley Art Club member and the daughter of the artist Henry James Howard. She lived in Sutton, Surrey.

Women had historically been discouraged from the nude as a genre, and even after it became acceptable for women to attend Art School drawing from a live model, rather than plastercasts, was considered inappropriate. A measure of the degree to which men felt threatened by the idea of women painting a nude is demonstrated by the hostile reaction provoked by Laura Knights iconic Self Portrait (1913), now in the collection of The National Portrait Gallery, which the Times critic of the day summed up as 'something dangerously near to vulgarity'

Somehow, women painting women hardly ever infuses into her work the higher charm of the ‘eternal feminine’. This painting is obviously but an exercise, and as such it might quite appropriately have stayed in the artist’s studio. It repels, not by any special inconveniance – for it is harmless enough with an element of sensuous attraction – but by dullness and something dangerously near to vulgarity. - Claude Phillips, The Daily Telegraph, 17 April 1914

In Margaret Maitland Howard’s study, there is an honesty of purpose that might typically be absent from a nude painted by a man. As Alfred Lys Baldry observed in Contemporary Figures Painters, The Studio 1925, this ‘plain matter of fact’ approach to the nudes– ‘the frank fidelity of the woman artist’ - , shared none of the characteristics of the ‘idealized rendering of the female nude as seen by a male painter ‘ The source of the above quotes is an article by Pamela Gerrish Nunn, Self Portrait by Laura Knight, The British Art Journal, volume VIII No. 2 p 53 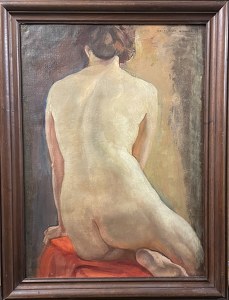