Hugh Finney was a painter, draughtsman and teacher who trained initially at Bromley School of Art, where he attended evening classes from 1915, and then at Beckenham School of Art to where he won a trade scholarship in 1918. He studied painting with Amy Katherine Browning and etching with Eric Gill. Around 1927 he won a scholarship to the Royal College of Art, where he studied under William Rothenstein. Horton, Houthuesen, Ososki and Freedman were amongst his friends at the college. In 1929 after graduation he took up a travelling scholarship to Rome returning to teach part-time at Chelsea School of Art under Percy Jowett and later Harold Sandys Williamson. From 1927-1934 he exhibited at the NEAC. In 1935 his painting Mother and Child was acquired by Carlisle Art Gallery. During WW2 Finney worked for the light rescue service of the Civil Defense. After the war he taught part time under Anthony Betts at Reading University and was in charge of life drawing there when he retired in 1970. Although he was reclusive and reluctant to show his work he did exhibit at the RA Summer exhibition (in 1950 and 1954) and the Portrait Society and at The Paris Salon. A large solo exhibition took place at the University of Oxford's Institute of Education in 1964. We are grateful to Nicholas Finney and David Buckman for assistance. 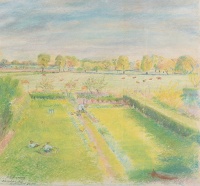