Born at King's Heath, Birmingham, Henry Albert Payne studied at the Birmingham School of Art under E R Taylor. He was among the students who painted murals in the Town Hall (his panel exhibited 1890), and joined the staff in 1889.

His main interest was in stained glass. Having taught the subject in the 1890, he himself underwent a course of instruction from Christopher WhaII in 1901, and by 1904, though still teaching, he was running a busy independent stained-glass prac¬tice.
Meanwhile he was involved in a number of decorative schemes with the Bromsgrove Guild, and in 1902 was commissioned to decorate the chapel at Madresfield Court, a task which occupied him for twenty years and is one of the great achievements of the Arts and Crafts movement. It also led to his painting a mural in the Palace of Westminster.
In 1901 Henry Payne had married Edith Gere, sister of Charles and Margaret and herself a talented artist, and in 1909 they settled at St Loe's House, Amberley, in Gloucestershire, thus consolidating the colonisation of the Cotswolds by Birmingham artists begun when the Geres had moved to Painswick a few years earlier.
Payne continued to pro¬duce stained glass and founded the `St Loe's Guild', while also painting portraits and landscapes.
He exhibited at the RA (1899- 1935), with the Arts and Crafts Exhibition Society, and elsewhere, and was a member of the Society of Painters in Tempera.
Henry Payne died at Amberley 4 July 1940.
We are grateful to Chris Mees, Professor Stephen Wildman​, Caroline Swash​ and George Breeze for assistance. 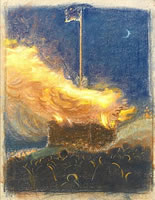 Henry Payne
Bonfire to Celebrate the... 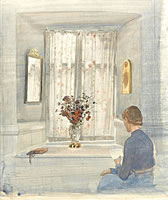