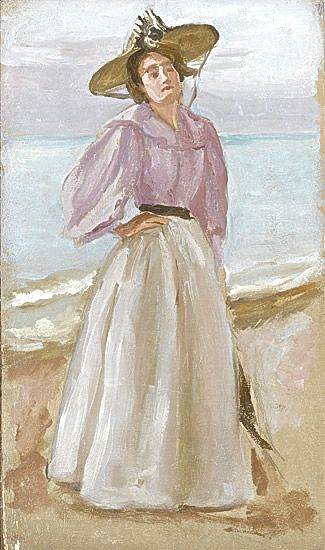 A portrait of the same sitter, entitled The Mauve Hat, is in the Tate Collection (T03644). As the sitter was originally identified as Mrs Studd, the Tate painting was assumed to be a portrait of the artist’s wife. However, given that Studd remained a bachelor throughout his life, it is likely that this is the artist’s mother.

After meeting Whistler in Paris in 1892, Studd worked with him in 1894 and
1895 in London, where they were neighbours in Chelsea for some ears.The
style of this panel, which is related to three other views of Venice by Studd on similar sized panels (Tate), is indebted to Whistler’s paintings of beaches and seascapes. Studd was also a collector, and he bequeathed three major works by Whistler to the National Gallery, London (now in the Tate Collection): Symphony in White, No. 2: The Little White Girl; The Fire Wheel; and Nocturne: Blue and Silver – Cremorne Lights).